Following our strict release schedule (…), here’s a new Yabause version.
This new version includes so many new stuff, I cannot list them all.
(If you really want the full list, it’s on our repository)

END_OF_DOCUMENT_TOKEN_TO_BE_REPLACED

Just to let everyone know we’ve switched our setup to use Transifex, which should be easier to collaborate and ultimately cut down on our work.

So apparently PayPal in their infinite wisdom has decided that Yabause is illegal and apparently infringing on Sega’s copyright, despite several court cases that prove that emulators are perfectly legal if done correctly. It should also be noted we have never received any legal threats or letters from Sega or anyone else since our first release back in 2003. They have limited our donation account and from my understanding the account will be closed after the funds are released in 180 days.

We’re not too happy about this, but considering PayPal’s hard handed approach to dealing with anyone they deem in violation of their ToS there’s not much we can do. Anyone who’s donated in the last 60 days will have their donation refunded.

So unfortunately we can’t accept monetary donations at this time. We still accept hardware donations or job offers. Please visit our team needs page for our list of needs.

Just want to announce that development builds are now available on the download page! This should give you guys your latest version fix until we’re ready with the stable release.

Just want to let everyone know we’re currently in the process migrating several things away all from Sourceforge. We’re well aware of the concern with the changes in Sourceforge’s business practices and we’re taking it seriously. The site itself, along with the source repository, forum and wiki shouldn’t be affected since we already moved that away from Sourceforge some time ago. However file release downloads, bug reports, and a few other odd things still need to be moved.

Only 14 months since last release and here’s a new Yabause release already!
This new release is about change, on both the user interface and the emulation core.

We added an essential feature missing in Qt port: the debug interface. With this new feature, we now recommend the Qt port as default port for Linux (and friends) and Windows. You can also use it on Mac OS X or you can use the specific Cocoa port. This port gained a new feature too: it can now loads ISO and BIN/CUE files, so you can play on a Mac without an optical drive.

There’s been many changes on the emulation side too: The software renderer is now a big boy and now handles transparency and many other VDP2 features, making many more games playable. The OpenGL renderer also include a number of new features, but as the software renderer, though slower, is running more games, we made it the default.

The last big thing in this release is it will be the last to support some options, mainly ports, that we will remove as we can’t, or don’t want, to maintain them anymore. 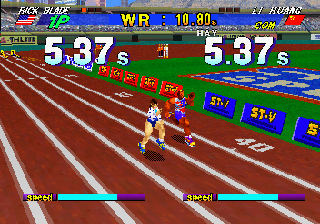 First, we remove three ports that have been superceded by better alternatives:

The PSP port will disappear too, except if someone feels like taking it over.

On the technical side, this will also be the last release to be buildable with autotools and we’re dropping support for autopackage.

P. S.: Are you going to port it *again* to Dreamcast? Hope you do so

When I try to run an iso of Panzer Dragoon Saga,m after playing the into movies when it is supposed to go to the actual game, it crashed with ‘Invalid SH 2 Opcode’. Mac OS X port.

@noradninja PDS is supposed to go ingame, so it may be a problem with your dump… you can try dumping your game again, or use your real CD.

Yay! Time to reminisce with some good ol’ shmups!

A new release. I wish external controller support and the ability to do HD was there.

Noice! I was a bit worried Saturn emulation might have all but died. Thanks for not disappointing!

First time here, but I love you guys.

Perfect since I just nabbed a sealed copy of Sakura Taisen for a few cents.

Just passing by to thank you soooo much for your hardwork
so far this is the only saturn emulator that gives me a decent speed
Please keep up the great work!!

Thank you guys, very good work. Your emulator is very promising, continue like that. I hope you will fix the sound in Fighter Megamix, my favorite game on this console and there is still no very good emulation of it. I’m considering to make a donation next month

This updated release couldn’t have come at a better time! I am in the middle of updating the PC in my MAME Arcade machine and having a Sega Saturn emulator was at the top of my list of things to add. I’ve had SO much trouble with others in the past with my Front End (Maximus Arcade in Win 7 x64) – so this is truly a welcome surprise! Keep up the great work, and thanks for not forgetting that there are many of us out here that love the Saturn, and wish to keep playing! I still have my original system, but some games just deserve to be played on my arcade machine

Hi! just dropped by to say thanks!

With no good options to emulate saturn it is nice to know you are still working on it!

Keep it up, we all are thankful!

great relase! nice to see the beloved saturn to live again…
I’ve got the error:
“File not found:
Cannot initialize ISO-File Virtual Drive”
what am I doing wrong?
thanks

Long time without a notice about Yabause. But now I got 9.12 😉

Friend, THANK YOU for developing this great Saturn emulator, TY!

Thank you) Emulator is not perfect, but it is easy to set up and in my humble opinion best emulator of Sega Saturn ))PS Greetings from Ukraine)2 PS Sorry for my english)

Panzer Dragoon Zwei moves slow… but, great.
I like Yabause!!

Thanks!!
Now i can play Rayman on my macbook air!!

But how can I use the translation file(.yts)?
I do load the file ,but it just doesn’t work anymore.

Thanks for the info about the dump, I re-dumped my discs and its working good now.

Only question: When I run PDS in the OpenGL Renderer on Mac OS X, the speed seems to be cut about half. Doubt it’s my machine, I have an 8-core Mac Pro with 11GB RAM and a Radeon 5770 1GB…anyone know whats up with that?

hi … why port on dreamcast in code ?
plz build this port for burning on cd….

Thank you so much for this update. Got some great Saturn memories & it’s nice to be able to go back to them.

how can i get it to work on the wii

Oh no, the PSP Port will dissapear…

@noradninja I’ve got the same trouble. To fix it, don’t use “BIOS Emulation” and use a real Saturn BIOS (in “Settings…” page). You also have to set “Software” as your Video Adapter

Thank you for your great work!!!!

great work!!!!! thanks!!! please for next version!!! please…try to work the ASTAL game. now are black screen!!!

Please do not give up android Sega Saturn emulator,I hope you can accomplish it,we can play store bought

The Yabause Team is not connected or affiliated with Sega® or any mentioned company in any way.
Companies and all products pertaining to that company are trademarks of that company.
Please contact that company for trademark and copyright information.